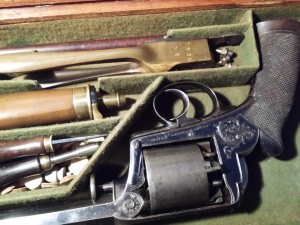 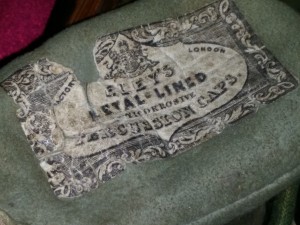 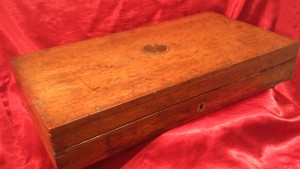 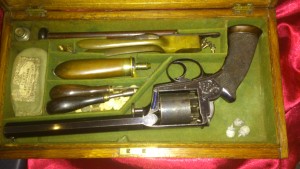 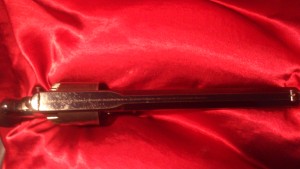 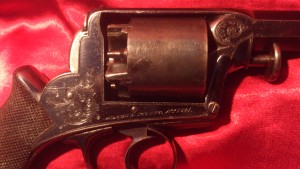 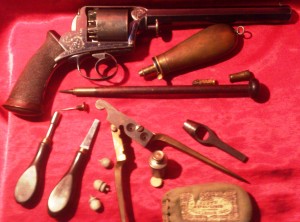 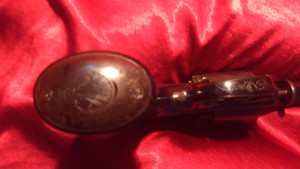 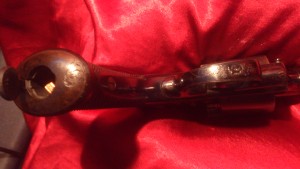 Nothing is known about this revolver except its appearance in the English market led the attack on Colt and formed the connecting link between the transitional and pepper-box revolvers and the “true” revolvers of the late nineteenth century.

This 38 Bore (.492″ chamber dia; .479″ bullet dia) “Dragoon” self cocking, five shot, percussion revolver is engraved on the frame with ADAMS‘S,PATENT,No1341 along with intricate scroll work. It is stamped with the London proof and view marks on the cylinder. It has a dovetailed bead foresight, notched ‘V’ rearsight, scroll engraved frame, blued cylinder and chequered walnut one piece grip, with engraved Butt Trap. The blued octagonal barrel is 8″ long.

The grip strap is stamped with the No 1341 with an “R” underneath. This “R” suffix introduced in 1852 gave Adams a royalty on every patented gun sold in England. This followed the receipt of funds from T.A.Hankey of “Hankey’s” bank for expansion in return for 1/8 of his 1851 patent royalty. The “R” suffix was begun at gun No 4000 and was usually marked on the frame in brackets, the “R” on this gun was engraved by the retailers. This revolver has a very low serial No and was probably one held in stock by Deane Adams and Deane as the Hankey deal came into effect.

The grip is flared with a blued butt cap which has a shell engraved trapdoor for percussion caps. The barrel is inscribed DEANE ADAMS & DEANE (MAKERS TO H.R.H. PRINCE  ALBERT) 30 KING WILLIAM ST LONDON BRIDGE.

Original oak case (15″ x 8″ x 2.5″) with empty brass escutcheon on lid, lined with green baize. On inside of lid is a pictorial trade label of Wm DOOLEY  Gun Maker No11 Ranelagh Street LIVERPOOL, obviously the retailer.

This revolver has little evidence of use. All of the accessories appear original (other than the turnscrew which is a later addition but of correct pattern) and in excellent condition.