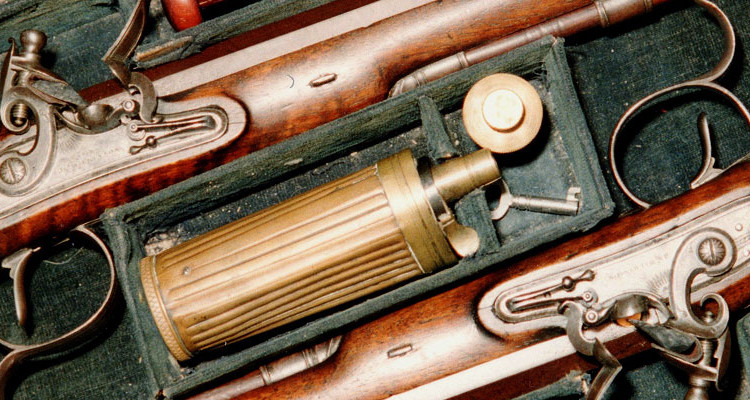 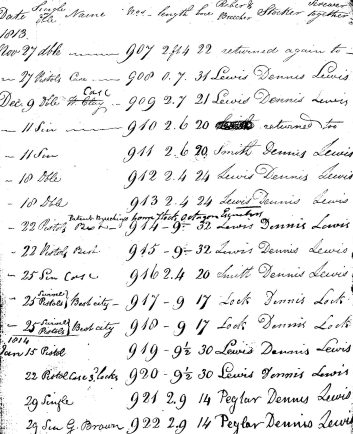 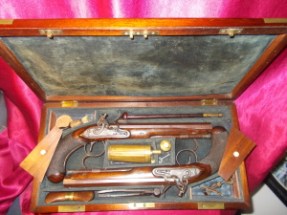 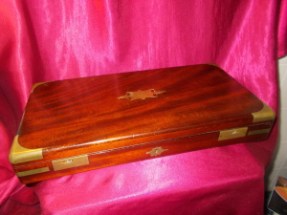 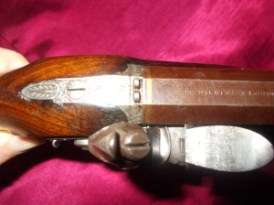 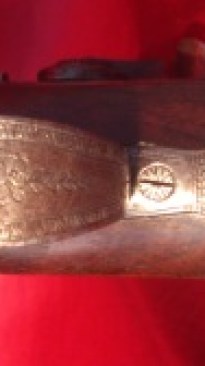 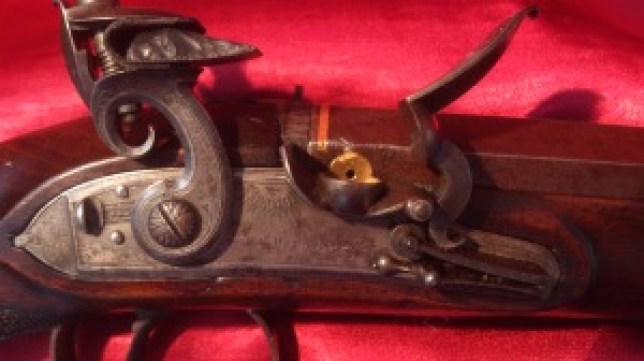 Cased pair of Flintlock Duelling pistols finally assembled on 15th January 1814. The outworkers involved in the manufacture were

Mr Lewis who was the “Breecher, Ribber and Screwer-together”, and Mr Dennis, the “Stocker”.

Very little history is known about these pistols which were probably numbered 919 and 920 and were made for a Mr Burt who picked them up from the makers on 22 Jan 1814. A copy of the relevant page of Wilkinson’s ‘Gun Record Book’ is available.

Much more is known about the maker James Wilkinson, however it is worth stating that James, ex Henry Nock apprentice and married to a woman Ann Jones who was probably Henry Nocks’ adopted daughter, eventually became a partner in the business, which he finally took over on the death of Nock, in 1805.

James had a son Henry, who carried on the gunmaking business and added swordmaking for which the Wilkinson Sword Company is famous today.

The barrels which are 9.5″ octagonal, sighted, browned twist with a smooth bore size of .545″ (30 bore). They are inscribed on top flat JAs WILKINSON LONDON GUN MAKER to his MAJESTY the London proof and view marks on the bottom flat. Gold and engraved bands at the breech. The outworkers involved in the manufacture were Mr Lewis who was the “Breecher, Ribber and Screwer-together”, and Mr Dennis, the “Stocker”.

They are cased in their original Mahogany case, 17.5″ x 9.0″ x 2.5″) lined with blue velvet. The case has three locks, two of them sliding, which was considered so different that it was noted in the original Wilkinson sales book next to the entry attributed to these pistols, i.e.: numbers 919 & 920.

The complete set has little evidence of use and has been well cared for. Certain of the accessories are of later addition yet of original pattern. 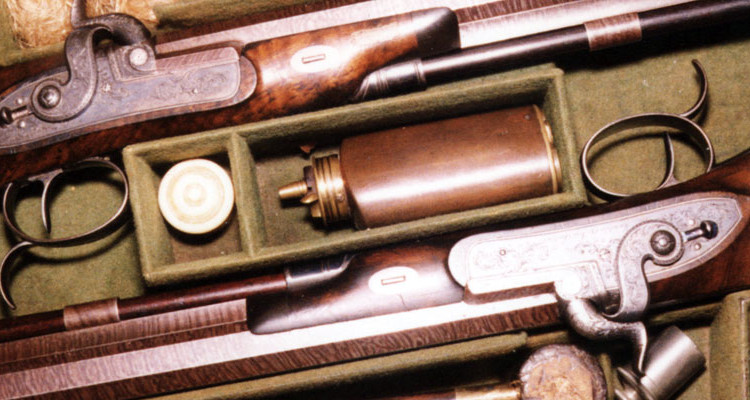 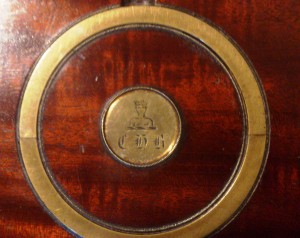 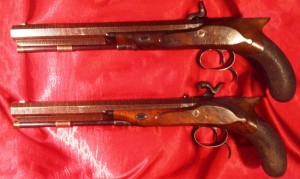 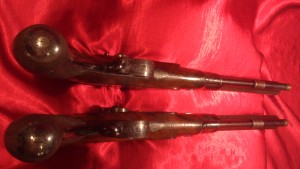 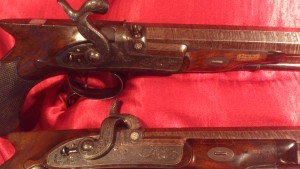 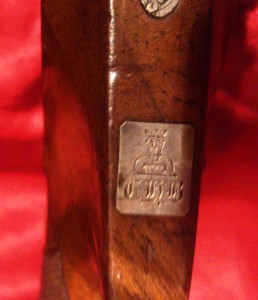 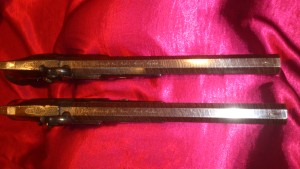 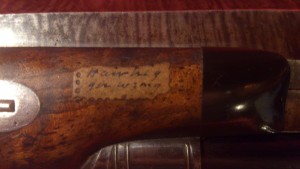 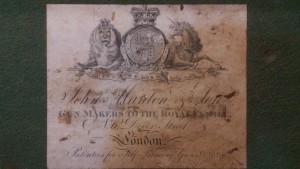 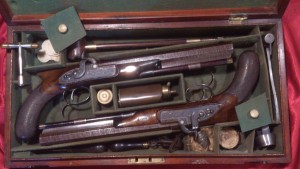 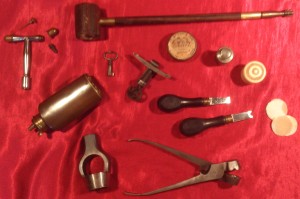 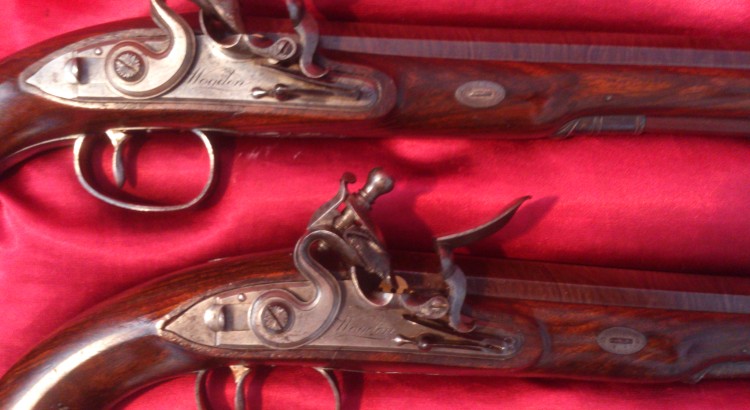 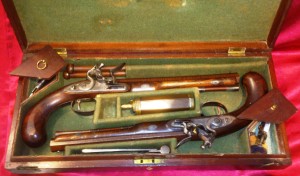 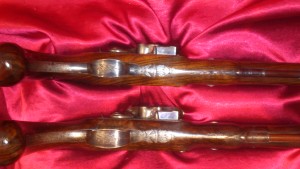 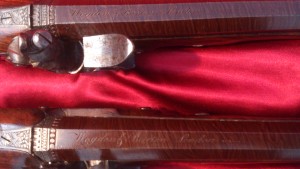 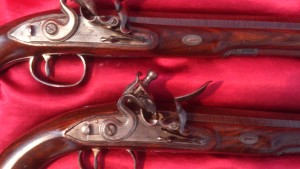 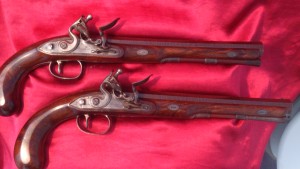 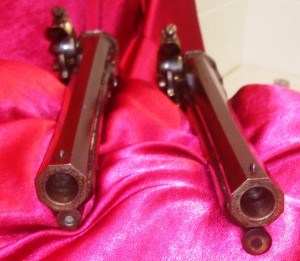 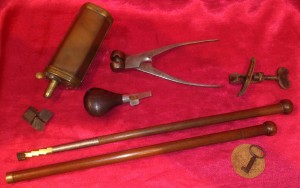 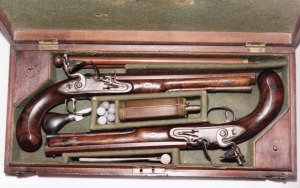 No history is known about these pistols other than that of the maker, which is well documented. However it is worth stating that Wogdon joined with John Barton in 1794/1795 and these pistols although classically Wogdon are engraved on the top flat of the barrels “WOGDON & BARTON LONDON” yet on the bottom flat (hidden by the stock) are stamped the initials “R W” and the lock plates are engraved ‘Wogdon’ only. It is believed that these pistols are among the first supplied under the new partnership. “Robert Wogdon”, was made famous during his lifetime, in the Poem: “Stanzas on Duelling” (1783), by an Irish Volunteer; in which it states, “Hail Wogdon!… Patron of that Leaden death

Interestingly these pistols look identical to the pistols used in the Burr-Hamilton duel of 1804, including the ‘concealed hair triggers’

The barrels which are gently swamped to the muzzle, are 10.25″ octagonal, sighted, browned twist with a smooth bore size of .550″. They are inscribed on top flat WOGDON & BARTON LONDON and carry the London proof and view marks on the bottom flat.
The gold lined touch holes with their flat bolted locks, double raised edge cocks with sliding safety bars inscribed WOGDON and their fine set triggers are of classic Wogdon form.

They are walnut full stocked with engraved trigger guards, stylized pineapple finials and ramrod pipes. The ramrods are wooden, one with ball worm and reversible iron powder measure, the other horn tipped

For a similar set see P135 plate 514 in “British Gunmakers Cards Cases and Equipment” by Neal and Back. (Note identical case damage!)

The complete set [excluding an oil bottle!] has evidence of use but has been well cared for.